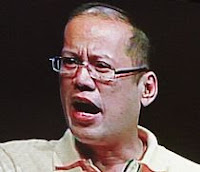 Earlier, Deputy Presidential Spokesperson Abigail Valte was quoted by ABS-CBN News as saying that the Palace was "not privy to the discussions of the Liberal Party in the House" referring to what at the time were preparations being mounted in the House of Representatives to lodge an impeachment complaint against Supreme Court Chief Justice Renato Corona.

Turns out the impeachment initiative was reportedly an exercise "to appease an angry President Benigno Aquino III"...

Belmonte and another Liberal Party stalwart, Cavite Representative Joseph E.A. Abaya, revealed that a “furious” President Aquino wanted a “fast” impeachment against Corona after he and seven other Arroyo appointees had issued a temporary restraining order (TRO) to block the travel ban against Arroyo.

The Chief Justice is accused of dispensing of his duties in the High Court in a manner allegedly biased towards former President Gloria Macapagal-Arroyo. He is also accused of graft and corruption for allegedly failing to reveal the full value of his personal assets.
Posted by benign0 at 12:30 PM

This work is licensed under a Creative Commons Attribution-ShareAlike 3.0 Unported License.